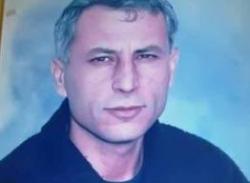 Younis, a Palestinian citizen of Israel from the Palestinian town of Arara in Israel, was arrested by Israeli authorities on January 6, 1983, according to official Palestinian Authority (PA)-owned Wafa news agency.

Younis, who was a university student at the time of his arrest, was was sentenced in 1983 to life in Israeli prison for allegedly carrying out an attack on an Israeli soldier in the occupied Golan Heights as part of the Fatah resistance movement in 1980.

However, his sentence was later reduced to 40 years in Israeli prison.

While Yunis was among some 20 imprisoned Palestinian citizens of Israel who were expected to be released as part of the Oslo peace accords in the 1990s, Israeli authorities have yet to release them.

Younis has written two books while in prison -- one in 1990 titled “The political reality in Israel,” and the other in 1993 titled “The ideological conflict and the settlement.”