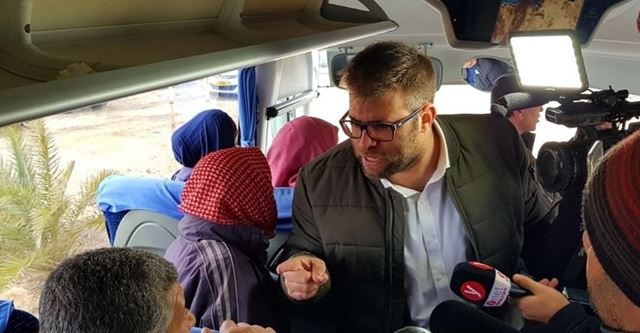 An ultra right-wing Israeli minister verbally harassed Palestinians from Gaza as they traveled on a bus to visit their imprisoned relatives in souther Israel’s Nafha prison, hurling abuse at women on the bus calling their sons “dogs.”

As he confronted the Palestinian families, he turned to the mother of an imprisoned Palestinian and asked, "Who did you come to visit? What did your son do?" to which she replied "He did not do anything."

Hazan responded to the mother by saying "Your son is a dog. He's a dog. You come to visit the scum who are sitting here in prison, whom you see as your family members."

As the woman attempted to respond to Hazan’s abuse, he shouted over her saying “I will make sure you can not visit here any more and we'll do everything so you will not get in. You are not welcome here, you have to understand well, you raised your son to murder."

Hazan was with a group of other right-wing Israelis who are part of the so-called Task Force for the Release of Prisoners and Missing Persons.

The group has vowed to continue intercepting buses and attacking Palestinian families as long as Hamas continues holding Israeli soldiers in Gaza.

During his attack on the families, he said “I want to tell you all, your friends in Gaza are holding our brothers, Hadar Goldin and Oron Shaul and Avera Mengistu, and if you do not bring this message home that we want to get our children back you will not come here anymore. If you continue here you will not see them alive."

The International Committee of the Red Cross (ICRC), which organizes the weekly trips for families of Palestinian prisoners from Gaza, responded to the incident, saying “the prisoners' families were entitled to visit their children with dignity.”