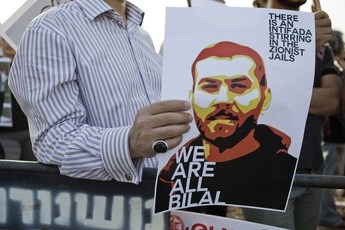 Former long-term hunger-striking Palestinian prisoner Bilal Diab entered his seventh day of hunger strike in protest against his administrative detention -- Israel’s widely condemned policy of internment without charge or trial -- on Wednesday, according to the Palestinian Prisoner’s Society (PPS).

Diab, a resident of the village of Kafr Raai in the Jenin district of the northern West Bank, wasredetained in a predawn military raid on July 14 and immediately started a hunger strike that lasted 20 days, according to prisoners rights group Addameer. He had also taken on a 77-day open hunger strike in prison in 2012, alongside Thaer Halahleh, in protest of their administrative detentions. He was released on Aug. 9, 2012 after reaching an agreement with Israeli authorities to end his strike. According to PPS, Diab is now being held in solitary confinement in Israel’s Ashkelon prison in retaliation for his hunger strike. The group highlighted that the fourth Geneva Convention prohibits an occupying power from moving prisoners from the occupied territory (West Bank) to the occupying state (Israel). APPS lawyer who visited Diab in jail said that he has also began refusing water to protest his transfer to a solitary confinement on Monday. Diab, according to the lawyer, is also refusing to take any vitamins or undergo any medical checkups. His health condition has reportedly deteriorated quickly, PPS said, adding that he currently suffers from overall fatigue, headaches, ear aches, and abdominal and back pain. Diab is reportedly being held in a tiny insect-infested cell, and was given an old mattress and a thin blanket to sleep on, while he uses his shoes as a pillow. He has not been allowed to bathe since he began his strike, PPS said. Addameer considers administrative detention, which allows Israeli authorities to imprison someone without disclosing any evidence against them, to be a form of “arbitrary detention” and “psychological torture.” Palestinians could develop a variety of psychological disorders owing to the controversial policy, the group said, including long-term depression and chronic anxiety. Rights groups and activists have long pointed out that Israel’s use of administrative detention has been used as a tool by Israel to detain Palestinians without justification. The policy is almost exclusively used against Palestinians. According to Addameer, 6,279 Palestinians were imprisoned by Israel as of August, 465 of whom were administrative detainees. The group has estimated that some 40 percent of Palestinian men will be detained by Israel at some point in their lives.