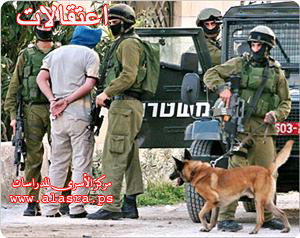 Locals told Ma'an that Israeli troops ransacked the home of lawyer Faris Abu al-Hasan in the Rujeib neighborhood and escorted him to his office in the city center, where they confiscated dozens of files concerning Palestinian prisoners in Israeli custody.

The soldiers then arrested Abu al-Hasan and took him to an unknown location, locals said.

Al-Bitawi is a 33-year-old journalist and researcher.

Both men work for Solidarity Foundation for Human Rights.

She added that three Palestinians were arrested in Birqin west of Jenin, two in Atara southwest of Ramallah, one in Birzeit near Ramallah, and two in Hebron.