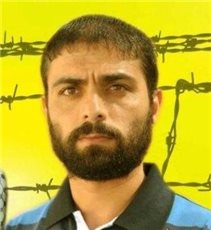 A Palestinian prisoner in an Israeli jail claimed that he was assaulted by a prison doctor while in an infirmary.

Alaa al-Hams, who is at Eshel prison, said that on Dec. 2 he suffered from severe pain in the stomach, was unable to move his limbs, and started foaming from his mouth.

Al-Hams was then transferred to the prison infirmary where the doctor repeatedly beat and threw him on the ground, he said.

He added that the incident happened between 10 and 11 a.m., and was recorded by a camera in the room.

Al-Hams, who started a hunger strike on Jan. 6, said he suspended the strike after they agreed to transfer him to Ashkalon prison in order to receive proper treatment.

A prisoners’ society lawyer who visited al-Hams said he was diagnosed with tuberculosis in 2012, and received intensive treatment for six months, which resulted in several complications including swelling in the lymph nodes as well as stomach and nerve problems.

Al-Hams says he is facing a slow death, in constant pain, and his health is deteriorating.