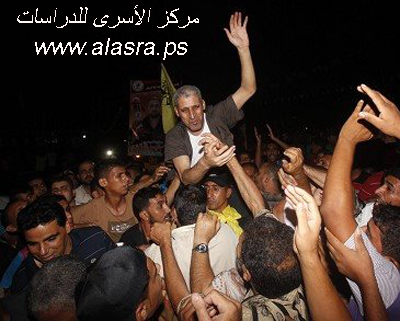 Najeh Mohammad Mikbel spent 24 years in the Israeli jails, and was only released in late October as part of a negotiated prisoner release between the Palestinian Authority and Israel, family said.

The brother of Najeh Mohammad Mikbel said that the Israeli forces handed a notification to his brother to meet with Israeli intelligence after raiding the house and caused many damages.

5,200 Palestinians were being held in Israeli jails as of Oct. 2013, according to the Palestinian Authority's Ministry of Prisoners' Affairs. Another 1,280 are in Israeli prisons for being inside Israel without permits.

Since 1967, more than 650,000 Palestinians have been detained by Israel, representing 20% of the total population and 40% of all males in the occupied territories.

Under international law, it is illegal to transfer prisoners outside of the occupied territory in which they are detained, and the families of Palestinian prisoners' face many obstacles in obtaining permits to see their imprisoned relatives.