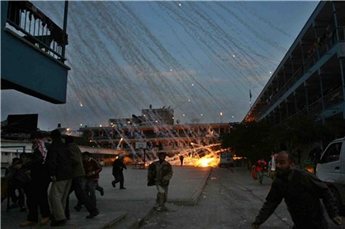 Locals said the airstrikes targeted two chicken farms in the al-Manara neighborhood in Khan Younis and a tunnel belonging to Hamas' al-Qassam Brigades in the north.

Witnesses said Israeli forces also targeted a training site for Islamic Jihad's al-Quds Brigades. The site was empty and no injuries were reported.

The Israeli army said the attacks followed reports of rocket fire while soldiers were operating near a border fence. Israel said the fire was aimed at the soldiers but no injuries were reported.

Israeli jets were flying over Gaza for hours late Tuesday.

An Israeli army statement said the air force "retaliated and targeted a weapon manufacturing facility and two terror tunnels in the southern Gaza Strip, and a location used for terror activity in the northern Gaza Strip."

It added: "Direct hits were confirmed."

Army spokesman Peter Lerner said that "IDF soldiers came under terrorist fire while engaging in a counter-terrorism activity. Attempts of attacking soldiers will not, by any means, be tolerated by the IDF."