The text of the message delivered by the Minister of Prisoners Issa Qaraqe U.S. President Obama 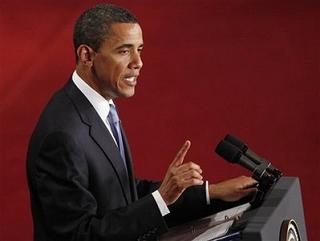 21 March 2013 Your Excellency Mr. Barack Obama President of the United States of America We, the families of the Palestinian prisoners and detainees in Israeli occupation jails, welcome you here in Palestine, hoping that your visit to our Holy Land will represent a new step forwards towards establishing the foundations of a just peace in the region and putting an end to the bloody occupation for which our people have paid, and continue to pay, dearly. The prisoners and their families are looking forward to your visit with great hope and high expectations, since the prisoners issue holds a significant position in the Palestinian people’s hearts and minds. We believe that the release of prisoners is a fundamental requirement to achieving peace, and will help to promote confidence in the peace process moving forward. Since the beginning of the occupation in 1967, more than half a million Palestinians were arrested and, to date, there are around 4900 prisoners in Israeli jails, among them women and children,  elderly, sick, physically and mentally challenged people, elected Members of Parliament, civil servants and military personnel, as well as administrative detainees. These people are kept in inhumane conditions, while Israel practises arbitrary measures against them which violate international human rights law and humanitarian law. Mr. President, just a few weeks ago, Palestinian prisoner Arafat Jaradat was killed while in Israeli custody and his body showed signs of torture.  Another Palestinian prisoner, Samer Al-Issawi, has been on  hunger strike for over 241 days now. Samer’s health is in severe danger and he may die at any moment. Your visit also coincides with an atmosphere of popular anger due to the continuation of Israeli violations and the re-arrest of detainees who were released in the Shalit deal, as well as fear for the lives of the prisoners who continue their hunger strike. We Palestinians are living in cages as a result of prolonged occupation and a lack of clarity of our path towards freedom and independence. We hope that your visit will bring a genuine will and a political decision to implement peace in the region based on the two-state solution. This means ending the occupation of our people and land and releasing thousands of Palestinians, including  107 pre-Oslo prisoners as well as MPs, civil servants, administrative detainees, patients,  women and children. We also hope for the will to implement the agreements between President Mahmoud Abbas and former Israeli  Prime Minister Ehud Olmert to release more than 1000 Palestinian prisoners. We believe that any political negotiation that is based on achieving the Palestinian people’s right to self-determination, and on terms of reference within the framework of international law and the principle of two-state solution, must begin with the release of thousands of Palestinian prisoners. This is an essential part of any just settlement that would lead to achieving a comprehensive peace. Mr. President, you have always been a strong advocate of human rights and have called to promote human values. It is time that this evolves into the creation of real peace. You know the difference between what is human and what is racist in other cultures. This gives us hope that you will maximize efforts to reinvigorate the peace process based on the principles of justice, equality and dignity, and exert effort to turn the State of Israel into a peace partner, in order to move the peace process forward. It is high time that the occupier withdraws from our country, so that we can begin to heal and live once again. There can be no normal life with the occupation nor under the occupation. There can be no normal life with the one who prolongs the occupation and holds thousands of prisoners in jails and military bases, and causes suffering in thousands of Palestinian homes. We bring to you the tears of mothers and children of Palestinian prisoners, who wish to live normal lives as human beings and who yearn for freedom, peace and coexistence. Mr. President, the prisoners have thoughts of life and peace, not destruction or death. This is all they are asking from the Israelis.   With respect, Families of Palestinian Prisoners State of Palestine