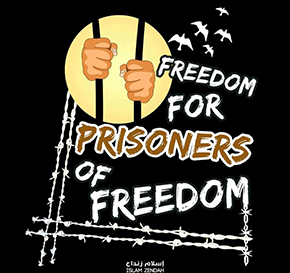 The Palestinian prisoners an ex prisoners Association "Husam" demands the International Committee of the Red Cross to launch an urgent appeal  to the international community in order to save the lives of hunger striking Palestinian prisoners "Samer Isawi , Ayman Sharawna , Jaafar Izzideen , Tarik Kadaan and Akram Rikhawi.   Husam stressed that the hunger striking prisoners are threatens with certain death at any moment as a result of their continued hunger strike which they have been on since a very long period as a protest against their illegal and arbitrary arrest inside the israeli jails.   The Association said in a statement today that the ICRC appeal could raise a real concerns on the lives of these prisoners at the international level due to the importance of such urgent  appeals launched by the ICRC in cases of necessity, which could pave the way for International intervention in order to save the lives of hunger striking prisoners by exerting pressure on the occupying state "Israel" to meet the just and legal demands of their release and to put an end to their ongoing suffering.